mBIT - The Power of Dreams

"Dreams are illustrations... from the book your soul is writing about you."


Dreams have an incredible power to connect you with the deeper aspects of your innate wisdom. I’ve written before about how dreams are often messages from the ‘other than conscious mind’ and can be ways our heart and gut brains communicate with us.

Many Wisdom Traditions say that dreams are portals to the spiritual and esoteric planes, and that in dreams we can unlock the gateways to para-normal consciousness. As a scientist by training, I’m usually sceptical of such claims, however many years ago, after completing my first Physics Degree, I spent a substantial period of time doing a Masters Prelim. for a degree in Parapsychology, and during that research process I discovered evidence that to this day I still can’t explain with current scientific paradigms.

A fascinating experience from our mBIT workshops

So it came as a delightful surprise when a participant at one of our mBIT Coach Certification workshops reported an incredible and powerful dream experience with the ‘homeplay’ we had set for the evening of the first day of the workshop. 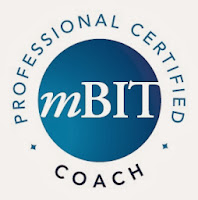 In the training, we ask participants to get in touch with their dreams as messages of wisdom from their heart and gut brains. You see, every night as you sleep, your head brain goes through periods of what is known as REM (Rapid Eye Movement) sleep. REM sleep is a normal stage of sleep, occurs approximately every 90 minutes on average, and is associated with the act of dreaming.

Fascinatingly, the gut brain also goes through a process akin to REM sleep, only in the gut this is known as RGM (Rapid Gut Movement) sleep. Approximately every 90 minutes, while you sleep, the gut goes through periods of RGM. It is suggested by some researchers that this is a time when the gut and head are communicating and integrating the knowledge and experiences of the day. It has also been noted by researchers that people with Irritable Bowel Syndrome and other inflammatory bowel disorders suffer from poor sleep patterns, experience abnormal amounts of REM and RGM sleep periods and report more intense and prolific dreaming compared to control subjects.

So we instruct participants that “as you lay in bed, just before drifting off to sleep, do mBIT Balanced Breathing and fill you heart with peace, love and compassion. Then breathe these up into your head and down to your gut. Fill all your brains with calm, peaceful love. Talk kindly and lovingly to your brains and ask them to give you a message in your dreams about what you need to know to make a transformational shift in your life.”

And this is what one participant, Diane, reported next day in the class:

“I was somewhat dubious about this exercise because I rarely remember my dreams. I went to bed, thinking that I would take notes first thing in the morning about either a dream or whatever came to mind.

Just before I woke, I had a vivid dream. I was in the kitchen of a beach house, I recognised the fridge as the one I currently have, but the building, the furniture, the view & everything else was not familiar to me. There was the sound of people discussing things. I was feeling an immense sense of peace, looking at a hand drawn picture on the fridge in 3 colours – green, red, blue - on a square of white paper, boat, beach, trees, and lighthouse. I knew it was special to me because I was immersed in a profound sense of peace, as I looked at it.

A woman came into the room, she was very upset. I put my arms around her as she sobbed. Neither of us said anything. I had no idea what was wrong. At the same time, I knew that I just needed to be there for her. Her daughter came in, also crying & her son was behind, poking the daughter in the back, teasing her, ridiculing her, finding it really funny & looking very proud of himself. The daughter joined the mum & I in a hug & the son walked off.

As I awoke, I was aware of the head-brain message – write down the facts.

On reflection I now feel how the gut-brain kicked in simultaneously – performance anxiety of not having anything to offer back to the class, of sharing something that I sensed is really deep. My heart brain response was go back to bed & meditate, aligning my 3 brains – which I did, & after feeling my way through the experience received a message – draw the fridge drawing on paper. However, my head brain said: ‘I can’t draw’. I had a sense of something coming from outside of me, an energetic strong urge. Draw the picture!

But I thought, I don’t have any markers. Then I remembered. One of my clients had given me 3 whiteboard markers last month, they had told me that they didn’t need them back, but I am seeing them next week & had them in my bag. I thought of how I would draw the image & went into fear. Since I believe I really can’t draw.

I moved into my heart & waited, picked up a pencil, sketched, tried to fix it, to get it perfect. Started again, moved into the beautiful sense of peace I could easily recall from my dream & was in flow. As I finished, I looked at the drawing – it wasn’t perfect, things were out of proportion, the lighthouse was higher on the fridge drawing. I put it in a plastic folder to take to class. I felt at ease. I had a story to relate to the class.”

And here is the picture that Diane drew, which she showed the class at this juncture in her story: 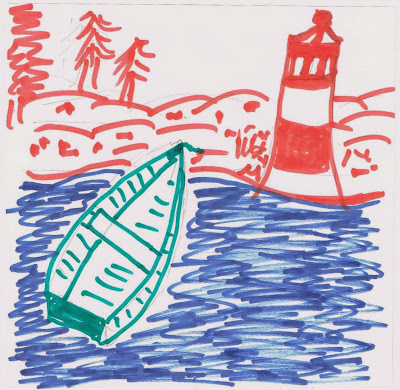 “With a couple of minutes before I needed to leave, I checked my email. There was one from my first ever paying coaching client. I worked with him over a decade ago in the USA. He is now living in Canada. One of the things we worked on then was him getting back in touch with his creativity. He started to paint again. We stayed in contact, maybe an email every 2 to 3 years after the coaching, he had not painted. He contacted me last year & we did 4 more sessions. He started a pen & ink art class & I asked if he could send me some of his work – I thoroughly enjoy sharing in client’s engagements in ‘being themselves more with skill’ (Goffee & Jones).

I opened the email from him.  I was stunned. He had sent me his first ever color drawing which he had only recently completed and wanted to share with me. It was so similar to the drawing in my dream! How do we explain this?”

And here is the drawing from Diane’s client, (shown with his permission): 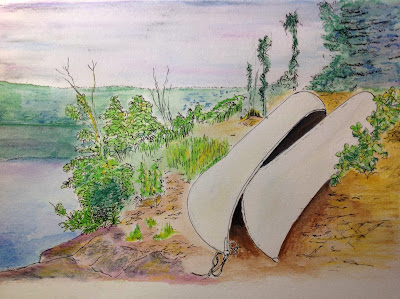 Isn’t this an incredible experience! The images are so very similar, especially when you consider that Diane was drawing an image from her dream. You can see that both images share common elements, a lake, boats with cord dangling from the front (in one there is 2 narrow boats laying against each other, in the second image there is one wide boat), trees on the shore, etc. Diane’s drawing is like a dream distorted version of the client’s artwork, mirror imaged and with identical image elements. Where hers has a lighthouse, this is similar to the trees on the edge of the lake in the client’s picture. The rope at the prow of the boat is the real kicker!

There are fascinating elements in the dream that relate strongly to the gut brain and heart brain prime functions. The upset woman and daughter hugging Diane are clear heart messages about connection and relational affect. The boy pushing the young girl (the younger Diane perhaps) in the back is about courage that pushes from the back to the front in the gut. Diane is standing in front of the fridge (where we store food to protect it, food is a core focus of the gut brain and perhaps symbolic of that which is life affirming) on which the picture is placed on the fridge door. The picture ends up being an image of a real picture that Diane’s first ever paying coaching client had sent her while she was sleeping in real life.

I spoke with Diane sometime after the training about what the dream meant to her and what messages she got from it. She said that the whole experience of the dream and the subsequent email had spooked her quite a bit, but that as a message of transformational shift it had opened her up to thinking about the deeper spiritual import of life. As she described herself, she had up until the mBIT training been “a head on two legs”, that she had denied her heart and gut and their intuitive competencies most of her life and been largely living from head-based cognitive and rational functioning. But mBIT changed all that, and the dream was an important part of the shift. It proved to her that she could connect with something that rational logic and science could not explain. How could she have dreamt and drawn such a similar image sent to her in email while she was asleep? It defied logic. Yet it happened. So intuitive and para-normal experiences were opening to her and she was learning to trust the messages and intelligence of her heart and gut brains. To connect with the whole of herself and her deeper spiritual aspects.

Indeed, in follow up with Diane six months later, she related to me that she had now had a number of strange and bizarre intuitive communications and experiences. The workshop and her subsequent use of the mBIT techniques has opened the doors of intuitive perception for her. She is now tapping into something beyond the normal 9 to 5 experience of life. And this has helped her to truly bring her spirit alive and connect with a deeper and more generative wisdom.

It’s amazing, but when you learn to align and connect with your heart and gut brains, something larger than the ego self really does emerge. And mBIT facilitates this type of connection. We’ve now had quite a few people report that they’ve tapped into amazing transcendent experiences through mBIT. And isn’t that what Wisdom Traditions have been saying for thousands of years? According to the majority of spiritual traditions, we have 3 souls (head, heart and gut) and the heart and gut souls are the portals to the spirit and to a wisdom that can’t be gained by focusing on the head brain alone.

It’s a truly fascinating and life enhancing experience. If you haven’t already, you may want to read mBraining or go on an mBIT workshop. With mBraining and mBIT you truly can evolve your world! 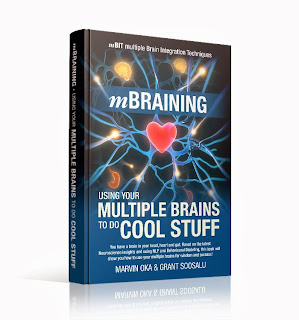 we are in
AustralianPlanet
australia's guide